North Korea has sentenced the pastor of one of Canada's largest churches to life in prison.

Hyeon-Soo Lim, leader of 3,000-member Light Korean Presbyterian Church in suburban Toronto, has been held by North Korea since January, and allegedly confessed in August to conspiring against the government of Kim Jong-Un. 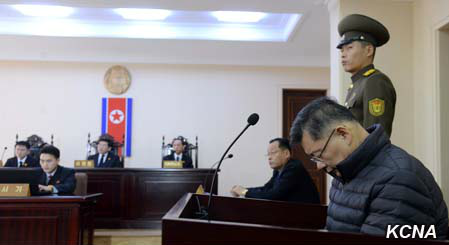 According to the official Korean Central News Agency (KCNA), state prosecutors argued for the death penalty against Lim in Wednesday’s 90-minute trial at the nation's supreme court, reports The New York Times. The defense begged for mercy, pointing to Lim as a fellow Korean and his alleged confession. Lim’s lawyers asked for a life sentence "so that he can witness for himself the reality of the nation of the Sun as it grows in power and prosperity," reports Reuters.

The government accused Lim of “trying to use religion to destroy the North Korean system,” among other charges, reports CBC News.

KCNA posted photos of the trial.

[Originally published on August 3 at 11:50 a.m., entitled “North Korea Reveals Why It Captured Canadian Megachurch Pastor | After hundreds of humanitarian trips, Toronto pastor has been detained since January.”]

After being detained since January, the pastor of one of Canada's largest churches has allegedly confessed to a “subversive plot” to overthrow the North Korean government and to set up a new “religious state,” reports The New York Times.

Hyeon-Soo Lim, leader of 3,000-member Light Korean Presbyterian Church in suburban Toronto, spoke both at a press conference and later at a church service, according to reports by the Hermit Kingdom's state news agency.

"The worst crime I committed was to rashly defame and insult the highest dignity and the system of the republic," Lim told a Pyongyang congregation, apparently reading from a script.

Detaining Christian foreigners is somewhat of a North Korean tradition, but accusing them of planning to set up a theocracy is new, AsiaNews said.

Lim has been held by the North Korean government since January, when the 60-year-old was scheduled to spend a few days there on humanitarian work. His church has worked in North Korea for almost 20 years, and Lim has made hundreds of trips to oversee a nursing home and orphanage there, said church spokesperson Lisa Pak.

"That's the most that we know, that the press conference happened and he admitted, I use that word very lightly, to some charges," Pak told Reuters.

The church released a statement after Lim’s confession:

The family and church are eager to have Mr. Lim home after close to 7 months in detention in the Democratic People’s Republic of Korea. There are no comments regarding the charges and allegations made against Mr. Lim except that the humanitarian aid projects that Mr. Lim has both initiated and supported in the DPRK have been for the betterment of the people. It is this tremendous love for the people of the DPRK that motivated Mr. Lim to travel to the nation over 100 times. He remains a compassionate and generous man and we hope to see him home soon. We are grateful for all those who share in our concerns and ask for your continued prayers and support.

Lim was born in South Korea, and immigrated to Canada with his family in 1986, where he helped to grow his church from five families to more than 3,000 people.

“You can imagine that, being ethnically Korean, there is a personal investment in the people of Korea,” Pak told the Toronto Star when he was first detained. She told CNN it was unlikely that Lim was proselytizing while he was there.

"He knows the language, he knows the nature of the government, so we don't see that as a legitimate reason that he would be detained," she said. "We don't believe that's the way he would have behaved. He's very wise about that."

The Canadian government has severed consular ties with North Korea, but Sweden has an embassy in Pyongyang and does some diplomatic work for Canada. Reuters reported in March that the Swedish ambassador was pressing for a meeting with an unidentified Canadian citizen detained there.

"We continue to advocate for consular access and for a resolution in his case," stated Canada’s Foreign Affairs department.

Lim follows a spate of Western missionaries who have been arrested in North Korea, which has spent the last 13 years topping Open Doors’ World Watch List as the worst place for Christians to live. An estimated 70,000 Christians are held in prison camps there.

American missionary Robert Park deliberately got himself arrested and spent six weeks in a North Korean prison in 2010, saying his goal was “to proclaim Christ’s love and forgiveness” to Kim Jong Il and to call for the release of political prisoners. "My hope was, through sacrifice, that maybe there would be repentance and people could come together to address issues in North Korea," Park told CT in an exclusive interview.

South Korean Baptist missionary Kim Jong-Uk is still imprisoned after after receiving a life sentence in June for allegedly working with underground churches.

Go to Christianity Today for the original article.