by Rick Hamlin | How the country’s best known Christian evangelist changed the lives of many and one in particular.

Billy Graham was in the habit of changing lives, and I don’t doubt that he changed my mom’s life.

I just talked to Mom on the phone who though she’s 91-years-old is still pretty sharp mentally (albeit she wishes her body had a lot less pain). “Oh, yes,” she said with wonder, “I heard him speak years ago.” 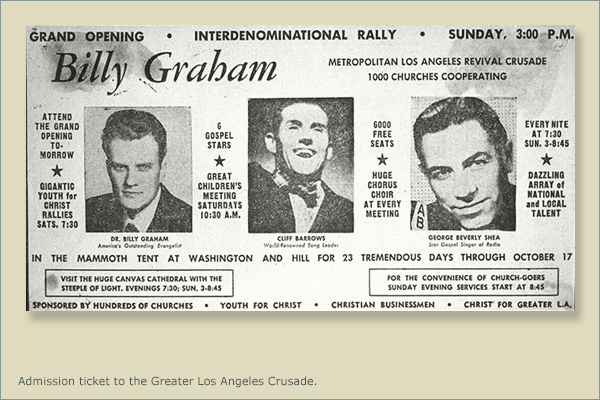 He was young back then, and she was even younger. “I’d just graduated from college, and I didn’t really believe in much of anything in those days.” She certainly didn’t go to church. She’d married a good Presbyterian in 1948 but they didn’t go to church together either.

Then they went and heard Billy Graham speak in Los Angeles. “It was in a big place,” she said. “There were lots of people there.” It would have been in one of the big tents that were set up for Billy Graham’s 1949 L.A. Crusade.

And yes, there were lots of people there. Initially the tent was supposed to hold 6,000 people. It had to be enlarged to hold 9,000 people. The three-week gathering was so popular it was extended to eight weeks.

Singing cowboy Stuart Hamblen was there and had his life transformed. Because of the experience he went on to write the popular hymn “It Is No Secret What God Can Do.” (And we’d wave to him every year when he rode his horse on January 1st in the Rose Parade.)

Even more celebrated, the World War II hero Louis Zamperini was there, still recovering from his horrific experience as a prisoner of war. Thanks to Billy Graham, he came to faith, later becoming the subject of the best-selling book Unbroken which Angelina Jolie made into a movie.

That campaign of 1949 put Billy Graham on the map. He became nationally famous and then world famous, some say because newspaper publisher William Randolph Hearst had proclaimed, “puff [promote] Graham,” and all Hearst papers wrote about him.

But Graham really didn’t need any puffing. The heavens shone down on his honest, heartfelt message and the closeness of Jesus that emanated from him.

As for my mom, well, she’s not famous at all, but she went on to have four children, raised us all to go to church every Sunday and became a wonderful Sunday school teacher herself. Billy Graham got that ball rolling.

They say that 250,000 people heard Graham in Los Angeles that year and that some 3,000 people came to Christ because of him. Nice to think of Mom among that number.