Dr. Brenda Salter McNeil | How I came to see the church’s prophetic work on race as a global issue.

“Where have you been? Why haven’t you helped us?​” Mavis shouted at us.

Twenty years ago my husband and I found ourselves in the British city of Birmingham, the second most populous urban area in the United Kingdom, and home to a large number of Jamaican residents.

We had been traveling in England for three weeks with a group of African American seminarians and church leaders. It was exhausting and exhilarating in equal measure. We lectured on issues pertaining to the black church in classrooms, preached in churches, dialogued with police, gave radio interviews, talked with civic and community leaders—all in partnership with the Oxford Centre for Mission Studies.

I thought this meeting in the Jamaican community would be the place where we would receive our warmest welcome. We were going to be with other black people! It would be a chance to rest, rejuvenate and let down our guard. I had imagined that we would be laughing and relaxing together in no time over good food and good music.

We pulled up at the church building in our rundown van, and a large group of Jamaican young people were waiting for us outside. But after we filed into the church and sat through some brief introductions, a young woman stood up and literally began shouting at us. Why didn’t you come sooner? Didn’t you know what we were going through?

We sat in complete silence, dumbfounded. We had no idea of their struggle and no sense of their expectations coming into this gathering. So we listened as this passionate Christian woman educated us on the history and the plight of the black British people.

We learned from Mavis that after World War II, the British government had encouraged mass immigration from the countries of the British Empire and Commonwealth to fill the shortages in England’s labor market. Many Jamaicans and West Indians came with the hope of making a better life for themselves and a brighter future for their children. However, instead of being embraced and received as equal members of society, as was promised by the 1948 British Nationality Act, the Jamaicans and other immigrants found that they were relegated to a low status in the economic and racial class system of England, with no hope of ever being fully accepted as “British.”

Even as their children grew, married, and started families of their own, they were essentially foreigners in their own land. And to add insult to injury, being born and raised in England meant that they were considered foreigners in Jamaica as well. Coupled with the injustice of economic deprivation and racial discrimination, this frustration led to violence when young Jamaicans took to the streets to protest in 1981. The status quo unfortunately persisted, however, and a second riot had erupted in 1985, just a year before our visit.

We showed up at their church in 1986, and here was Mavis demanding to know what had taken us so long! Why hadn’t we come sooner to lend our voices and raise awareness about the conditions they were facing? Were we indifferent to their suffering?

Honestly, it was awkward in the church that day, and none of us had any answers for Mavis. We were aware of the racial tensions and inequality in our own country, but we hadn’t realized that there were people in other countries around the world who needed us. We were uninformed about the racial, social, and political plight of our black brothers and sisters in Britain. And to tell you the embarrassing truth, I hadn’t taken any interest before that day.

Their news had yet to break through into our circles in the United States. We didn’t see ourselves as global citizens, nor did we strongly identify with others of the African Diaspora. We were just beginning to reap the benefits of the sacrifices made by the generations before us in the United States. We were finally starting to enjoy some economic stability, increased access to educational opportunities, and greater political and social influence. We hadn’t even considered looking outward. Our knowledge of the rest of the world was woefully underdeveloped.

We learned such a valuable lesson that day. We learned that our story was part of their story. We learned that we were part of a larger global narrative and that people needed us. I came home with the knowledge that I could no longer think of reconciliation in merely nationalistic terms. The world was changing, and I needed some new tools so that I could support folks like Mavis and her friends.

But a lot of us don’t recognize the prophetic role we can play both at home and abroad.

England was my wake­up call. That was when I realized that the world is demanding something more of me and something more of the church. People like Mavis are watching us and wondering why we remain silent on the critical social issues of our day. When unarmed young black men are shot and killed in the United States, why are so many Christians silent as we watch these events unfold? When over 200 schoolgirls are abducted in Nigeria or 148 college students are shot to death in Kenya or 43 abducted in Mexico, why is the Christian community not standing in greater solidarity with them?

It’s time for the followers of Jesus to embark on the prophetic journey that leads to reconciliation and transformation around the world. Many of us may already be aware of the need for reconciliation in our own backyard. We understand the realities playing out in our own neighborhood, our schools, workplace, political system, and culture at large.

But a lot of us don’t recognize the prophetic role we can play both at home and abroad. We aren’t yet fully aware of injustices and inequality in our communities, and this understanding and awareness is absolutely essential if we are to be God’s agents of reconciliation.

We cannot ignore the plight of the people around us, and as globalization continues its relentless march onward, we cannot turn a blind eye to the world beyond our national borders either. We have to face the realities here at home, and we must also embrace the stories of people all around the world.

You may buy her book here: Roadmap to Reconciliation: Moving Communities into Unity, Wholeness and Justice 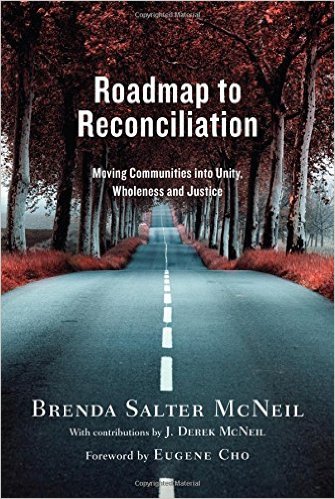 by Brenda Salter McNeil (Author), Eugene Cho (Foreword), J. Derek McNeil (Contributor)
5 out of 5 stars 4 customer reviews
How to get all 2 formats and editions
We can see the injustice and inequality in our lives and in the world. We are ready to rise up. But how, exactly, do we do this? How does one reconcile? What we need is a clear sense of direction. Based on her extensive consulting experience with churches, colleges and organizations, Rev. Dr. Brenda Salter McNeil has created a roadmap to show us the way. She guides us through the common topics of discussion and past the bumpy social terrain and political boundaries that will arise. In these pages she voices her call to all believers: "It's time for the followers of Jesus to embark on the prophetic journey that leads to reconciliation and transformation around the world. Many of us may already be aware of the need for reconciliation in our own backyards. . . . We cannot ignore the plight of the people around us and as globalization continues its relentless march onward, we cannot turn a blind eye to the world at large either. We have to face the realities here at home and we must also embrace the stories of people all around the world." Each chapter lays out the next step in the journey. With reflection questions and exercises at the end of each chapter, it's ideal to read together with your church or organization. If you are ready to take the next step into unity, wholeness and justice, then this is the book for you.