by Michael Jolayemi | Christmas is about deliverance from Satan and from self. Let us therefore rejoice, make merry, eat good food but let us come to know the Lord our Savior intimately and let us worship Him. He is the reason for the celebration.

Growing up in a poor family and in a remote cocoa-plantation village many years ago, I and my peers looked forward to Christmas with excitement. The sound of Christmas bell was something of great delight. More importantly is the change in our mothers’ kitchens with great aroma of new menus which often put us in a wonderful Christmas  mood. Christmas celebration gave us hope for good and rare food on the table; special food and special drinks. Lunch and dinner tables at Christmas time were seen only once a year. Christmas was usually a big time of festivities. And it was good because delicious food is part of the great celebration.

But not only food, our parents were always saddled with additional expenses of new Christmas clothes. Parents would have saved money throughout the year in expectation of Christmas or they would be forced to borrow because it was an issue when all kids were on their way to church in new attires and your kids had none. I recalled that many houses were thrown into chaos with children crying because they had no Christmas clothes either for financial reasons or that the dresses were not ready because the tailors did not finish sewing the dresses for Christmas. In our local areas, tailors were usually busy at Christmas time and if your clothes or that of your children were not given to the tailor well ahead of time, they were often overwhelmed and could disappoint a number of customers. There could have been an avalanche of law suits for breach of contracts if it were in places like America or U.K.; but no court in those areas would adjudicate on such breaches. Besides this, we were a small community where everyone knew each other and no one wanted to go that far to resolve issues; hence we managed our differences without court interventions.

The point is that everyone looked forward to Christmas time with high expectations of good food, new attires and other festivities. But Christmas has always been with great expectation in the world, not just for food and dresses like children in my community. It held the expectation of the birth of the Savior, God’s show of love for humanity. The people God created in His own image had been separated from Him as a result of sin which Satan had lured Adam and Eve into. The world which is ravaged with sin and wickedness longed for a messiah who would deliver the people from sin and satanic oppression’s. It was a big deal because people were sick and tired of their sinful situation. It was a hopeless and helpless situation and people were eager to see the Savior come. Christmas is therefore about the birth of Jesus Christ. Jesus is the reason for Christmas. If He were not born, we would not have any Christmas celebration. If He did not die, and resurrect, we would have remained in our sins. “For God so loved the world, that he gave his only Son, that whoever believes in him should not perish but have eternal life” John 3:16

Among prophets who spoke about this great expectation was Isaiah. “For to us a child is born, to us a son is given; and the government shall be upon his shoulder, and his name shall be called Wonderful Counselor, Mighty God, Everlasting Father, Prince of Peace. Of the increase of his government and of peace there will be no end, on the throne of David and over his kingdom, to establish it and to uphold it with justice and with righteousness from this time forth and forevermore.” Isaiah 9:6-7. God did it uniquely for the world; the God who became man came as a baby and in the depth of His love for us, laid down His life to restore our joy and fellowship with the Father.

Little or nothing was known about Mary, a Jewish virgin, who became the mother of our Savior. The Holy Spirit had visited her, and the Lord had favored her. She was carrying a unique baby in her womb, which would bring the most needed relief to the world of sin. How can this happen to me when I have not known any man? Mary asked from the Angel of the Lord who had brought great news to her from God. And the angel said to her, “Do not be afraid, Mary, for you have found favor with God. And behold, you will conceive in your womb and bear a son, and you shall call his name Jesus. He will be great and will be called the Son of the Most High. And the Lord God will give to him the throne of his father David, and he will reign over the house of Jacob forever, and of his kingdom there will be no end.” “The Holy Spirit will come upon you, and the power of the Most High will overshadow you; therefore the child to be born will be called holy—the Son of God. Luke 1:30-33, 35

And the day came, over 2,000 years ago; the despondent world was turned into a place of jubilation. The shepherds who were out in the field, keeping watch over their flock by night, were privileged to hear the great announcement, heralding the arrival of the long-expected King. “Fear not”, the Angel of the Lord said, “for behold, I bring you good news of great joy that will be for all the people. For unto you is born this day in the city of David a Savior, who is Christ the Lord. And this will be a sign for you: you will find a baby wrapped in swaddling clothes and lying in a manger.” Luke 2:10-12. Heaven and earth shouted for joy “Glory to God in the highest, and on earth peace among those with whom he is pleased!” The jubilation in heaven and on earth was that the separation of man from God was being taken care of once and for all.

The shepherds did not just hear the good news, they believed it, and they made the personal choice to go to see the baby. “Let us now go to Bethlehem and see this thing that has come to pass, which the Lord has made known to us.” And they came with haste and found Mary and Joseph, and the Babe lying in a manger. Now when they had seen Him, they made widely known the saying which was told them concerning this Child.” Luke 2:15-17. There were also the wise men from the East who had followed the star which they had seen in the East till it came and stood over where the young Child was. When they saw the star, they rejoiced with exceedingly great joy.  And when they had come into the house, they saw the young Child with Mary His mother, and fell down and worshiped Him. And when they had opened their treasures, they presented gifts to Him: gold, frankincense, and myrrh. Mat 2:10-11.

Christmas celebration with good food and new clothes is wonderful because something good had happened to us. But Christmas is not just about physical enjoyment of food and celebration. It is about joy for our freedom from sin, from sexual perversion, from hatred, lies, hypocrisy, adultery, fornication, uncleanness, lewdness, idolatry, sorcery, contentions, jealousies, outbursts of wrath, selfish ambitions, dissensions, heresies, envy, murders, drunkenness, revelries, and the likes. Christmas is about deliverance from Satan and from self. Let us therefore rejoice, make merry, eat good food but let us come to know the Lord our Savior intimately and let us worship Him. He is the reason for the celebration. What no one could do, He did for us. Also, remember that there are children without parents at this Christmas season, with no one to provide for them. You can act for Christ today in bringing joy to their hearts, and the hearts of the less privileged. 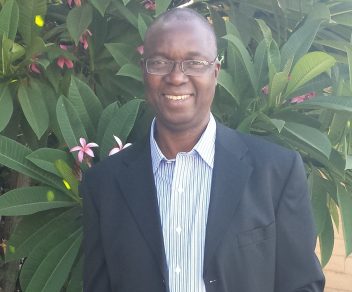 Michael Jolayemi is an author and Bible scholar. He has written few books on social issues: “Saving America: The war we can’t ignore”; and “Sheltered through the storm: the travails and ultimate triumph of the Church.” His next book is about the Sin issue and will be out by God’s grace next year. You can connect with Michael via www.conservativevoiceofreason.com or www.michaeljolayemi.com.