by Rev. Simon Yako | For more than three decades, the education of EMS Missionaries Children became a major issue to the Ministry. In the early sixties, an EMS Children School was built in Wushishi, Niger State and later in Miango Plateau State, but could not survive due to poor funding.

EMS of ECWA which is one of the largest indigenous mission agencies in Africa started when the then Sudan Interior Mission (SIM) now Serving in Missions (SIM) saw the need of involving Nigerian indigenes in planting churches across the country and beyond. Therefore, in 1948 a movement began by the name African Missionary Society (AMS) and after ECWA was registered, the name AMS was changed to EMS in 1964.

EMS of ECWA is a faith-based agency as well as a non-profit organization. Presently, EMS has about 1800 missionary couples that are serving in different location in Nigeria and beyond.

Though many of our EMS missionaries are facing enormous security challenges of attacks from Fulani herdsmen, Boko Haram, Bandits and Abductors, yet, they are willing to serve until Jesus takes them home to be with Him; this is at the detriment of their lives.

Many of our EMS missionaries are facing health challenges of different types because of the nature of the areas they are Many are serving where there is no good drinking water. Recently, many of our missionaries were examined and it was discovered that many have Hepatitis and from 2018, the Head Office spent over 9.1 million Naira on medical treatment alone. We have also lost 5 missionaries in the last 2 years as a result of that.

For more than three decades, the education of EMS Missionaries Children became a major issue to the Ministry. In the early sixties, an EMS Children School was built in Wushishi, Niger State and later in Miango Plateau State, but could not survive due to poor funding.

Currently, EMS Children School Jos has about 398 pupils with 40 orphans. It was started to meet the educational need of children of missionaries who are working in Central Region of Nigeria where we have had a lot of insurgency attacks in areas where our missionaries are serving.

EMS Children School Lakwame has about 156 children with 16 orphans. This was started to meet educational need of children of missionaries who are working in the Eastern part of Nigeria where we have the activities of the Boko Haram going on.

EMS Children School Kufana has about 90 pupils with 8 orphans. The school was also started to meet the educational needs of our missionary children whose parents are serving in the core-north of Nigeria where we have a lot of persecution. 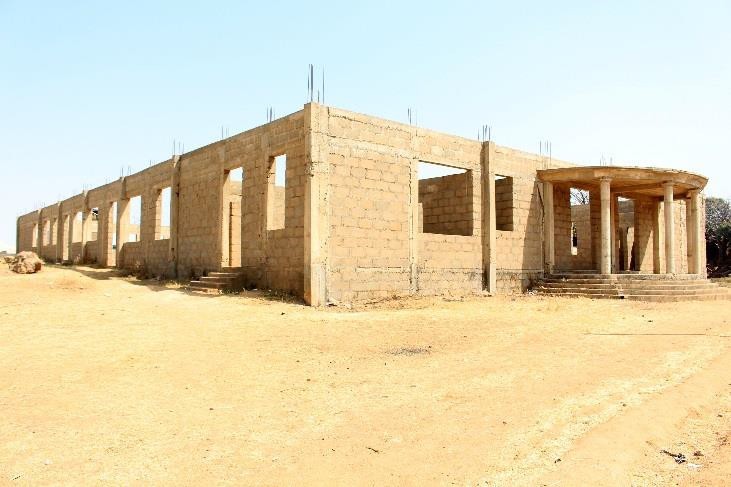 The ongoing Jos campus EMS children school dining hall building project
Therefore, as you pray, we are also appealing for financial support towards the following projects:

Rev. Simon Yako is the Director of EMS of ECWA. He was the Foreign Missions Coordinator
for EMS OF ECWA for almost 31 years beginning in July 1988 in Jos, Plateau Sate Nigeria. Rev. Yako received his Bachelor’s degree in Missions in 1992 and M.A in Missions and Evangelism in 1995 from ECWA Seminary Jos.